MSc Dementia student Lucy on the importance of language

How can language be used to change attitudes to dementia? Student Lucy Carroll discussed the issue as part of an assessment for the online MSc in Dementia. 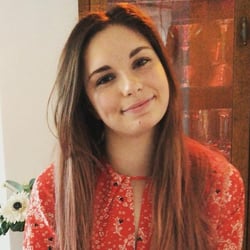 Lucy works as a registered nurse in the rehabilitation ward of an Orthopedic hospital, where's she's also recently been made the dementia lead nurse for the ward.

Here, she shares a blog post she wrote on language in dementia, one of the assignments for her MSc in Dementia with the University of Hull.

A bit of psychology

Let me begin with the psychology of language and the importance of language to all of us human beings. We have all probably heard that familiar saying, ‘sticks and stones may break my bones, but words will never hurt me’. HA!

How many of us when we were young actually believed this!? I certainly tried and failed! Words do hurt. Words are powerful. We remember words, they stick like glue, stuck stuCK STUCK for a lifetime. Not just bad words, good ones too, empowering words from your mum or your dad or your aunty, the words that got you to believe you COULD do the thing you were utterly convinced you couldn’t.

The power of language has been considered in many psychological experiments, including Loftus and Palmer (McLeod 2014) who conducted a study which found that when participants were asked to describe the speed in which a car was travelling when an accident occurred, the verb used affected the responses.

I would have to say that I do think if someone asked me the same questions, I would probably say a car that ‘smashed’ into another was going faster than one that ‘collided’. The point I’m trying to make is that the words we use daily have the potential to affect us and influence us in many different ways.

SO, to follow on from this point, I hope we can all agree that POSITIVE language can have POSITIVE outcomes. I found this video on YouTube about the power of words really interesting:

There is also a much bigger picture when it comes to language isn’t there? We all know there are certain things we shouldn’t say, and even certain things we wouldn’t say in front of certain people. For example, I choose not to swear in front of my grandparents and I know I shouldn’t and WOULD NOT (for the record) directly point out a physical fault in someone. As a group of people, we understand certain ‘rules’ about things… and it’s all to do with this thing called SOCIAL CONSTRUCTION.

Galbin (2014) suggests that there are many different definitions of social construction/ constructionism but essentially, it’s the concept that we learn what is good/ bad/ right/ wrong from the world around us, other people, and the experiences that we have. We form mutually constructed maps of the world (Galbin 2014). I know… this sounds complicated.

But the basic principle is quite simple. Most of us in the UK agree that for breakfast we eat cereal, toast etc. and have a roast dinner in the evening. Roast dinner for breakfast? A little unusual! Though… I actually would consider this.

So, what’s this got to do with Dementia?

For those who are unsure, the National Health Service (NHS) (2020) defines dementia as the term used to describe a range of symptoms associated with a deterioration in brain function. There are many, many, many types of dementia with the most common being Alzheimer’s Disease (NHS 2020).

But what does Joe Bloggs know about those living with dementia? Have they already got some pre-constructed thoughts about dementia? Does this affect the language they would use about dementia? So many questions!

Here’s a few links to some good, informative sites for some more material on dementia:

George (2010) highlights some of the negative language and stereotypical associations individuals make about those living with dementia; victim, mind-robber, shells, living death and burden. Spanswick (2017) adds to this with examples such as ‘suffering’, ‘past-it’ and ‘senile’.

I mean.. WOW, powerful words here. How do you think you would feel if someone referred to you as a burden for example? I know I would feel pretty awful. Spanswick (2017) argues that these terms are simply.. AGEISM.

Dementia (not always!) mostly affects those aged over 65. Dionigi (2015) identifies that there are stereotypes about older adults that have been formed from social constructs. Perhaps shockingly, Dionigi (2015) also outlines how our stereotypes can so greatly influence older adults; how they physically and cognitively function, how they recover from disease and how they see themselves.

Further to this, the RSPH (Royal Society for Public Health) (2018) states that stereotypes regarding older adults can affect their mental health and create health issues such as memory loss.

The chief care executive for England told the Guardian that the UK is totally ageist, with institutional ageism appearing in every sector (Hill 2018). AND the Alzheimer’s society (2015) suggests those living with dementia can face ageism discrimination. I believe as a nation we need to re-think the way we view the older generation, that might be a start.

Blog posts are one of the varied ways students on our online MSc in Dementia are assessed:

The media is surely part of this wide issue? I mean we pick up so much from what we read, what we see on TV and what we scroll through on social media right? The Alzheimer’s Society (2018a) agree and suggest that the media have a huge impact on the way society views dementia. The Mail Online (Hodgkinson 2010) has written an article asking why older men are boring. The Daily Express writes about older adults being rude and inconsiderate (Moore 2020).

Furthermore, Peel (2014) highlights some of the language that the media uses in regard to dementia such as; time bomb, feared illness and brain disease. Evans (2018) explains that this kind of language can lead to the discrimination of older adults.

AND, Evans (2018) also recognises the links between the negative language used around HIV in the 80’s and the language used about dementia now. That seems pretty shocking. Have we not learnt since then that the negativity in the media has negative impacts?

Evans (2018) also points out that the media can be criticised for outlining lifestyle factors as reasons for dementia diagnosis and almost blaming those living with dementia for their lifestyles. I would argue this is pretty unhelpful..

So, what language should we use?

Importantly I think, we should focus on what those living with dementia CAN do, rather than what they can’t (Alzheimer’s Society 2018b). This seems like an essential point to me… I find it really difficult to navigate my way around, so if someone consistently pointed this out.. I’m sure I would start to feel pretty rubbish. BUT I am fairly good at driving.. if someone can tell me where to go or I can have a satnav there to help, I enjoy my drive and I can get from A to B.

Swaffer (2014) recommends that we use inclusive, clear and non-judgmental language when we talk about dementia. The Alzheimer’s Society (2018b), and Dementia Australia guidance (2018) can be found here:

We all have our own opinions of many different topics, and I’m sure many of us have strong opinions about certain things. Have you ever been having a discussion with someone that has the opposite opinion to you on something you feel strongly about? Yep… that can be so frustrating! And we know in these discussions how HARD it is to change people’s views!

Law (2011) suggests that first, people need to realise they have a bias, then they should learn the consequences of their bias and finally, change their LANGUAGE and actions regarding the topic to ensure they are not being prejudice.

Wurtele and Maruyama (2012) indicate that education about older adults and ageism may reduce stereotypes made by younger adults. Also, they argue that there is an URGENT need to educate the general population on this topic and to gain more POSITIVE attitudes towards older people (Wurtele and Maruyama 2012).

So what can we do? I think we can challenge, question, inform, educate ourselves and we can change OUR language… which may help change someone else’s. The Alzheimer’s Society (2018a) identifies a few ways that we can challenge the media, such as: writing a letter to the producer and explaining why the language used was inappropriate and, using social media as a platform to challenge the inappropriate language used by the media.

This advice, and the government's living well with dementia strategy, can be found here: www.alzheimers.org.uk/blog/how-spot-and-challenge-negative-language-media

The NHS (2018) discuss that living well is maintaining the fact that the person with dementia is still THEM and involves things such as eating well, sleeping well, and exercising. Read more here: www.nhs.uk/conditions/dementia/living-well-with-dementia/

Previously there have been a multitude of dementia theories etc. NOW though, the focus is so much more on the people actually living with dementia and how they feel and the ways they want to be seen, heard, and viewed by others. Seriously, who knows more about YOU than YOU!? How would you feel if someone was making decisions for you without asking you, without including you, without noticing you… this is NOT fair.

Mitchell (2016) suggests that positive language can help individuals think differently about their future. Mitchell (2016) recommends that practitioners ask one simple and direct question at a time, which can be less confusing for those living with dementia. This kind of advice is so so meaningful!

Although healthcare and dementia is a massive subject in itself and I could go on and on.. I just thought it was important to mention, and if you work in healthcare, or you know someone that does, it could be YOU that makes a genuine substantial difference to someone’s care by ensuring the use of the correct and more positive language

So, to conclude, language in dementia is a complex and wide subject to discuss, and I have just about managed to cover some of the main points in this short blog. I hope those reading have learnt something, and I hope you take something away from this. I think one step at a time we can begin to change attitudes and to change language…. And in turn we can make sure those living with dementia smile a little more and live a little better.

Get the practical tools and mindset to lead positive change in dementia with the University of Hull's part-time online MSc. Choose from three start dates a year:

You can view the references for this post here.

How can engineering managers deal with post-pandemic challenges?
New film gives students an insight into how people with dementia can live well
MSc Dementia student Lucy on the importance of language