For one of her MSc in Dementia assignments, student Lina reviewed 'Slow Puncture', a book about living with young-onset dementia. Read her review here. 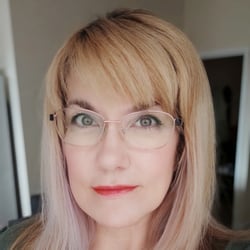 Lina Pazou studied as a nurse in Greece and, alongside her studies, is now working as a Care Manager for the Good Care Group, a company that provides domiciliary care for people living with dementia and other clinical conditions.

Lina also assesses care plans for people with dementia, seeing if the plan in place is up to date and working well for them regarding their emotional or physical health, suggesting alternatives when needed.

Read Lina's review of 'Slow Puncture', written for an assignment on the MSc in Dementia at the University of Hull.

Living well with dementia has often been discussed and researched in the last decades, while self-reporting has proven to be an important source of knowledge and understanding of the needs and wishes of people living with dementia (Brooker & Kitwood, 2019).

‘Slow Puncture’ (Berry & Blunt, 2020), a book written by Peter Berry, a man living with Alzheimer’s dementia, and Deb Bunt, a woman who became his friend, cycling companion and co-writer of this book, becomes a solid argument for the ability of people with dementia to lead a healthy, meaningful, active, and overall good life (Wolverson et al., 2016).

Peter walks us - or should I say rides us - through his struggle with his ‘dementia monster’ as he calls it. He describes in such detail, that it's as if it derives straight from the unconscious mind, how dementia affected his life and the life of his family. He offers a glimpse of the loss felt during this journey.

We become witnesses of a person with dementia who is reinventing, regenerating his life and self through purpose, determination, and action (Wolverson & Clarke, 2016; Clare et al., 2019; Ryff et al., 2008) while cycling on a penny-farthing across England.

Difficulty to receive a dementia diagnosis is common for people with young onset dementia (Moniz-Cook & Manthorpe, 2009) and Peter was no exception to this. It is hard for people to believe someone has dementia when they see a young and fit person in front of them.

Once the diagnosis was given, Peter and his wife Teresa had minimum information and support and that is why they felt that they were facing this alone.

At the same time, they were trying to understand and accept what would happen to them because this was not a diagnosis just for Peter, but a diagnosis for the entire family (Berry & Blunt, 2020; Smebye & Kirkevold, 2013).

People with dementia are getting less support from services when compared to other terminal conditions like cancer for example (Moniz-Cook & Manthorpe, 2009; Brooker & Kitwood, 2019).

Additionally, when a person is diagnosed with dementia, it is as if they are stripped of their previous role, status or identity and they are only considered as a person with dementia, often a thought surrounded by disabilities and loss (Berry & Blunt, 2020; Doka, 2010).

For this reason, it is common for individuals and families to decide to hide the diagnosis in the beginning.

Find out more about Peter in his video:

Peter, after regretting their original decision for secrecy, now firmly believes that it is better for the person and family members to be open and seek support as soon as possible.

People with dementia, besides the loss of memory, experience loss of other essential abilities for their everyday life activities (Birt et al., 2020; Doka, 2010). This creates an inner fearful frame that every individual has to confront.

There is a dark path of the unknown future that people with dementia are invited to pass, which unfortunately some fail to do so and depression or low mood are added to their condition (Curran & Loi, 2012; MHPF, 2016).

The book gives a clear picture of the losses faced and how Peter managed to get over his fears when he decided to have Deb cycle with him, adding one more meaningful relationship in his life (de Vugt & Dröes, 2017; Brooker & Kitwood, 2019). He decides to bring back purpose and ambition in his life, by finding new strategies to cope and new activities.

Writing a book and cycling hundreds of thousands of miles on a penny farthing in order to fundraise for Alzheimer’s research was critical for Peter.

People with dementia need to be supported to continue their previous but still interesting to them activities and enabled to adapt in new purposeful ones (Wolverson, Emma & Clarke, 2016; Wolverson, E. L. et al., 2016; Smebye & Kirkevold, 2013). This makes a difference in their lives and helps them live well with dementia.

Assessment methods for the MSc in Dementia will help you critically engage with the concept of living well with Dementia:

It is interesting to read and think about the differences between Deb’s and Peter’s chapters in the book. Concentrating on Peter’s self-reporting of his feelings and evaluation of his own life, it becomes clear that he feels better about himself and life than other people think he does (Patterson et al., 2018; Brooker & Kitwood, 2019).

Although he describes in detail how dementia is taking away valuable abilities and memories and how much this affects him, he is leaving the reader with the sense of positivity, ability, and purpose relating to people with dementia. Flourishing characterises his transition from his previous status, to a new one (Wolverson & Clarke, 2016; Seligman & Csikszentmihalyi, 2000; Wong, 2011).

Deb on the other hand, shows admiration towards Peter and his efforts or accomplishments and has accepted their different amount of input in this unique friendship.

Peter might not even remember who she is or what they have done together on a certain day, but she remembers, and she is accepting him the way he is. ‘Accepting’ may be a poor choice of word. She genuinely admires him and learns from him.

Awareness is essential so that everyone has a better understanding about dementia. People with dementia are raising their voices through various platforms and fight for their human rights. They are fighting for their dignity. They no longer want to be seen as ‘sufferers’ but as ‘fighters (Berry & Blunt, 2020).

They no longer want to be thought as ‘Peter the man with dementia’, but ‘Peter, the mechanic, the man with a wife and daughter who rides a penny farthing for a good cause’, the person with abilities.

The power of language

Words have power and can either elevate or vanquish a person living with dementia. Words can and will impact their lives and the lives of their family (Patterson et al., 2018; Brooker & Kitwood, 2019).

In the book ‘Dancing with dementia’ Cristine Bryden (2005) narrates her experience with dementia. Her journey is similar to Peter’s. She had to overcome and face her fears and obstacles that occurred after the diagnosis and describes how she managed to live well with dementia, maintaining an active, meaningful life. People living with dementia are self-reporting on how it is to live with dementia and creating a guide for others to follow.

Living for the moment attitude is extensively referred in the book (Macpherson et al., 2010). Peter knows he will not be able to keep precious memories, so he concentrates on what each and every single moment has to offer to him and others. He lives for the day. He is creating a legacy knowing that he may not have any recollection of the event right after the moment it ends, but the positive emotion will remain.

And this is what living well with dementia means. Memory is not everything. Emotions can replace the pieces of happiness that sometimes memory handles (Ryff et al., 2008; Macpherson et al., 2010).

Physical activity is producing ‘happiness hormones’, and Peter is mastering this. Cycling every day for miles is not only keeping him healthy but also occupied and occupation is a main factor for a meaningful life and on top of all it helps maintain a good mood (Brooker & Kitwood, 2019; Moniz-Cook & Manthorpe, 2009; Wolverson et al., 2016).

Finding a way to flourish

‘Slow Puncture’ is the epitome of positive psychology (Wolverson, Emma & Clarke, 2016; Wolverson, E. L. et al., 2016). It shows the strengths, the positive experiences and the changes that will eventually accommodate well-being.

Peter finds his way to flourish, to expand his horizons, and take his life in his own hands once he finds a purpose (Clare et al., 2019; Dodge et al., 2012). He cycles with a penny farthing across England to raise money and create awareness through social platforms and events for dementia.

Living well with dementia does not mean you do not have negative feelings or fear and insecurity. It means that overall, you can self-report that you are leading a good life and feel good about it (Wolverson, Emma & Clarke, 2016; Wolverson, E. L. et al., 2016).

Slow puncture leaves the reader with a positive feeling that people can live well with dementia. It is an honest narration of true thoughts and emotions. It raises hope and strength and shows that people can be productive and active.

Peter gained everyone’s respect with his actions. It was not a given. This is an add-on to his dignity and life purpose. His healthy supportive relationships and his collaboration with Deb made his well-being possible (Patterson et al., 2018; Smebye & Kirkevold, 2013) and as he describes in his book, people around him ‘suffer’ with his dementia and he lives with it.

This is a book that gives strength and voice to people living with dementia and their family members. It's bright, positive look at the condition, advocates for everyone affected from dementia and contributes to removing the stigma that follows a diagnosis.

An easy comfortable read, with numerous life quotes from Peter. Its honesty keeps you interested, and the pages turn in a non-stop rhythm up to the last page.

Critically challenge common perceptions of dementia as a diagnosis solely of loss and despair with Hull Online's MSc in Dementia. Choose from three start dates a year:

You can view the references for this blog post here.